Julia and the Shark 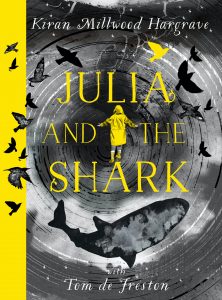 Here with Julia and the Shark she has written another memorable story, beautifully designed and crafted with her husband, the painter Tom de Freston. So the book as well as being a riveting story is a compelling work of art.

The story centres on Julia, ten years old, who goes with her parents to live in a lighthouse in a remote island in the Shetlands. Her dad has work there and her mum, a marine biologist is excited at the possibility of finding the rare elusive Greenland shark, a creature that can live for hundreds of years.

Julia makes friends with one of the locals and is enjoying herself despite not being allowed on her mum’s boat, also called Julia and the Shark, which goes off regularly looking for the shark. Gradually it becomes obvious that there is something unhealthy about her mum’s obsession with the shark, the tension and mystery builds until Julia finds herself on an extraordinary journey alone on the icy waters where she does actually meet the fabled Greenland shark.

Julia is one of those chatty children who talk about life, parents, words, numbers and friends. Her dad works mainly with numbers while her mother prefers words. ‘Numbers can help you keep track of things but only words can help you understand them’ p5. Kiran, a poet and wordsmith,  successfully creates a mystery and builds up the tension all set in an idyllic world during a summer holiday.

The hunt for the Greenland shark can be interpreted as a symbol for many things. When reading about a person’s obsession for a giant fish it is difficult not to think of Moby Dick especially when Julia goes off on her own to find the shark for her mum.

The illustrations are an integral part, sometimes taking over the work of storytelling, and the whole effect is very beautiful. I didn’t quite accept  the climactic encounter of Julia and the shark but the story  with its resounding themes of courage, compassion, the importance it places on science and the environment and its true to life characters embroiled in family mysteries impresses and lingers in the memory.